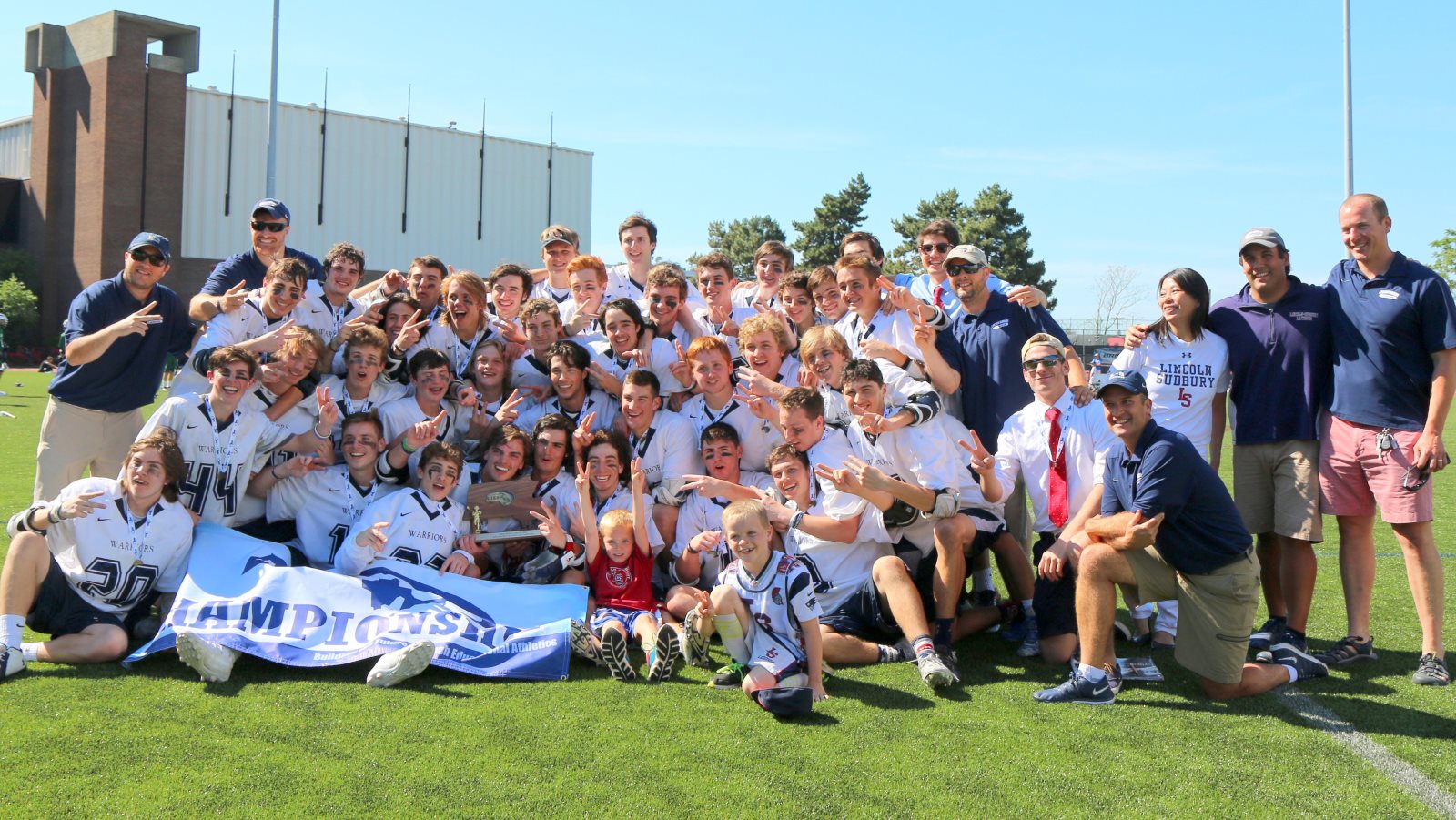 Where: The FieldHouse, 31 Union Ave, Sudbury, MA 01776 When: May 10, 2019, 6:30-11:00 PM - Registration @6:30 PM; Bags Fly @7:00PM. Who: Anyone 21+ who wants to play cornhole or just enjoy an evening with friends. Cost: $100 for each two-person team - DUE TO SPACE, WE ARE LIMITING TO 50 TEAMS. SIGN UP NOW! $35 each for each social ticket only - there will be a second court for non-competitive games  Food is included. Drink tickets for beer/wine are available for purchase at the event. Come meet the coaches and toss some bags!    Online registrations are now closed. For new teams and/or social tickets, please register at the door upon arrival. See everyone tonight. Thanks!

For L-S lacrosse players, state titles aren’t the beginning or the end

SUDBURY – Jordan Dow wasn’t expecting to play in the game against the Mercer Island Islanders, who were visiting from Washington state, that cold spring day in 2011. Dow was the short sophomore at the end of the bench. He had just made the varsity squad, having mostly played on the freshman team the year before. Then a senior got hurt. “I remember being this little guy running around with these big boys,” Dow said. “And I was thinking, ‘how was I going to do this?’” Dow’s introduction to varsity lacrosse at Lincoln-Sudbury Regional High School may have seemed abrupt that day. But in a way, Dow had been preparing for the moment nearly his entire childhood. And like many L-S boys lacrosse players, his commitment to the sport would extend well beyond his four years as a Warrior. “I think the one thing that I can say about this program is they are not only working to develop great lacrosse players, they are also working to develop great people,” Dow said. Dow is now the co-captain of the lacrosse team at New York’s St. Lawrence University, where he is a senior. He is one of at least 27 L-S alumni who are currently playing on college lacrosse teams. That includes John Sexton, a captain at Notre Dame, which is consistently ranked among the top 10 programs in the country. Sexton, L-S class of 2014, was named a First Team All-American earlier this year. “The preparation that we get from [...]

BOSTON — Leading by four goals heading into the fourth quarter of Saturday’s Division 1 Eastern Massachusetts state championship, the Lincoln-Sudbury boys lacrosse team was 12 minutes away from its third straight state title. L-S led in the final frame but after three goals from BC High, with the last coming from junior Charlie Pyne with 1:15 left in regulation, the Warriors called a timeout with 45 seconds left. After an L-S turnover, senior goaltender Trevor van Leer made two big saves on two hard BC High shots from in close and the L-S defense made a massive clear. The Warriors then carried the ball into the attacking zone for the final 25 seconds, as L-S held on for a nail-biting 8-7 win over BC High at Boston University’s Nickerson Field. [Source: Metrowest Daily News]

BOSTON — As the defending Division 1 state champion, the Lincoln-Sudbury boys lacrosse team had a target on its back all season. Every in-state team the Warriors played wanted to take them down, hoping for the satisfaction of knocking off the top dog. But an experienced L-S squad — motivated to repeat as champs ever since winning it all last season for the first time in 21 years — simply wouldn’t let that happen, with the Warriors only two regular season losses coming to powerhouses Manhasset, N.Y., and Summit, N.J. And once the postseason rolled around, L-S continued to maintain its season-long focus, plowing its way through the North section to return to the state championship game. The Warriors cruised past Duxbury last season, but had a much more difficult time against BC High Saturday afternoon. The Eagles defense did all it could to slow down a potent L-S offense, but the Warriors were still able to use a full team effort to knock off the South champions 10-8 at Boston University and capture their second straight state crown. [Source: The Metrowest Daily News]

Your contribution to LS Lacrosse will help defraying operating costs such as travel to out-of-state games and providing equipment and training materials.